Clean bumholes are fantastic. Really, I’m quite the fan.

However, as with most things, sometimes you really can get too much of a good thing.

Our office is in a centre where we have to, unfortunately, share bathrooms with other companies. 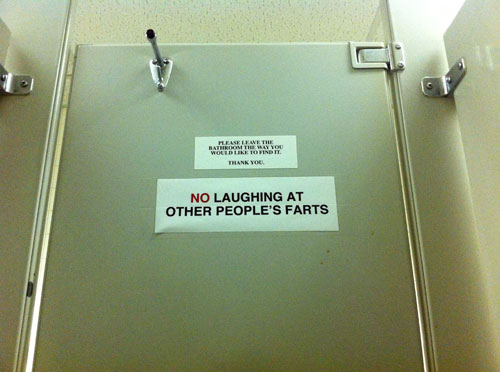 Every other day you get to pee next to the weird guy from the IT firm around the corner. A clear and simple “Hi!” suffices as far as conversation goes. More recently though, we’ve gotten to know one of these guys a little too well.

Earlier today, while sitting in one of the toilet stalls, my cubicle-neighbour and I had sync’d our releases perfectly. There I was, having just dropped the kids, and had my standard 1-2 wipes. This guy, however, was clearly on a mission to win.

Now, in my mind, nought-cleaning takes between 1 to 3 wipes, depending on the consistency of your movement. The guy next to me, it seems, is an obvious advocate of a clean cornhole. After our turd-duet, he wiped his chocolate starfish once. Then twice. Once he’d delivered his third wipe, I’d assumed he was done. But, just then, I heard the most aggressive wiping pace I’d ever encountered in a bathroom stall. If he was on Survivor, he’d be the guy they’d get to start the fire with two dry twigs … and an hour to spare. The wiping went on for about 15 consecutive seconds.

I stated then and there that this dude is without a doubt the protector of the polished-poop-shoot. (And obviously not scared of ‘roids.)

When I relayed the story to the entire office, Trev said “Yup, that’s The Polisher!”

His identity is still unknown. For now.

PUBLIC SERVICE ANNOUNCEMENT: If you’re a polisher, don’t. Here’s how you should wipe.

After the phenomenal success of Comedy For The Kids 2010, the ever-incredible Yenzani Children’s Home have been putting on the “Comedy For The Kids” comedy night every year to raise funds for the fantastic work that they do.

This year is no exception.

With the ridiculously-kind help of Mel Miller, Chris Mapane, Dave Levinsohn and Warren Robertson, this year’s event will be another great event not to be missed.

Apart from the awesome comedians on the bill, supporters of the evening will have the opportunity to meet world-legends Gary Bailey and Michelle McLean, and stand a chance to win a (very recently) signed Manchester United football shirt – which will be auctioned on the night.

Book a table for you and your friends, or for your office, or for your clients, but FFS, just BOOK A TABLE ALREADY!

Share this with your friends, colleagues, whoever, and help Yenzani Children’s Home bring more of the awesome to the kids they support.

On branding: If it ain’t broke…

August 9th, 2013 Posted by Don Packett Uncategorized 0 thoughts on “On branding: If it ain’t broke…”

Too often, too many people find solutions where there are no problems. If it ain’t broke…

August 2nd, 2013 Posted by Don Packett Uncategorized 0 thoughts on “What is my mobile going to do with R2,5m!?” 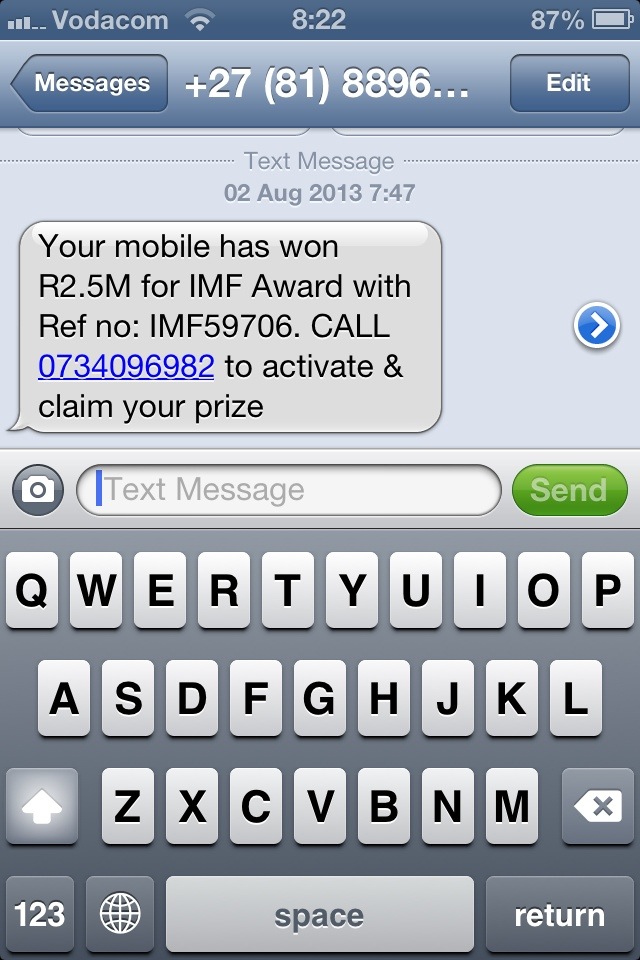 Last year I shared my thoughts around why I hate voicemail, and why I ask callers to rather SMS or email me over leaving a voicemail message.

If you send me an SMS or email, you have to:

1. Listen to voicemail stating my request for efficiency

Which leaves me to:

4. Read your SMS/email with your details and request, and take the next step.

4 steps as opposed to the 9-step wonderment that is leaving and retrieving voicemail. Read the post again if you don’t believe me.

I find it more common these days when I call people and it goes to voicemail. Most people are requesting “for a more immediate response, please SMS me”. I’m taking it that if I’m calling you, and you’re not available at that very moment, it would be fantastic to have a response that’s, in fact, more immediate.

I’ve taken it upon myself to now also never leave messages, and rather send an SMS, whether I’m requested to or not. I understand the efficiency, and should assist everyone else I think. It’s only fair.

So why have the network providers not done anything about this? Why still stick to the absolute chore that it voicemail?

I have a few thoughts on why, but mostly I think it’s legacy. Legacy that back in the day, answering machines on landlines existing because all we had was “voice”. Cellphones were invented, and voicemail was added. Then data started becoming the next big thing. Sending a message, an immediate delivery of content that someone on the other end could read and respond to (provided they had airtime, of course). So why not integrate the two?

There are some phones which allow “reply with message”, which the receiver of the call can select if they see a call coming in when they’re busy. However, if you miss the call completely, it’s then up to the caller to execute a plan to let you know he/she has been in touch.

Voicemail is not that plan.

The network provider which solves this problem first will be winning at life, and I’ll finally stop having to preach the benefits.