:: Why putting your brand in the hands of others is a dangerous game ::

The below image has been beaten to death in almost every corporate presentation in the recent past, with the obligatory “Look at what these guys are doing, changing the face of how we are and should be doing business! It’s extraordinary! We need to Uberise our business!” 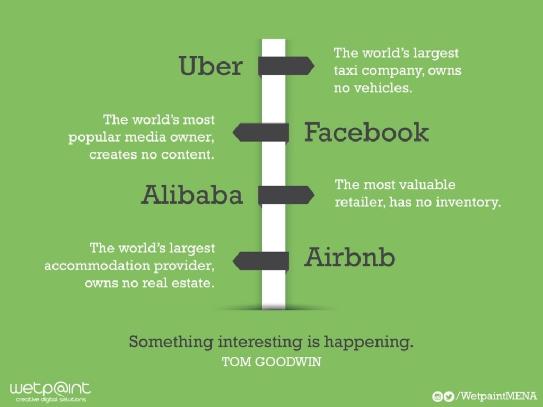 And it is extraordinary. Getting this right is no easy feat! And the term “Uberise” is now, apparently, a thing.

However, these guys need to learn from the wise words shared with Spiderman concerning power and responsibility. Because it is a concern, as they’re not always in charge of the power and portrayal of their brand, but they are – in the end – responsible.

This pic is the perfect vision of what Uber wants to represent. A fancy-shmancy driving service with a fancy-schmancy car and fancy-schmancy grin to greet you for the best ride of your life, all facilitated through a simple, easy-to-use app on your phone. Just… beautiful.

Keeping up with this appearance is extremely difficult though. Some (a tiny percentage of businesses) can keep this up because they put service first, above all else. The trouble is that, traditionally, when the business starts growing and investors need to see results, service falls behind. Finding this balance will tell the average and great businesses apart. Scarily, when that level and expectation of great service is out of your hands – like the companies mentioned above, you need to be way more vigilant with who you give that power to.

My view: The one thing that companies like Uber need to remember, constantly, is that when others are responsible for your brand, you need to ensure those “others” are going to make it, and not break it. It’s extremely difficult to control what you’re not in control of.

That’s the gist of my personal view. You can stop reading now if you get it (and you’re probably smart enough to get it, so well done), but if you want to read the personal story behind why I started writing this, read on.

For me, the Uber story started out beautifully, but the times they are a-changin’.

My first few rides with Uber were great. The service (and I know that I’m not alone here) intrigued me. A well-kept car pulls up at my pre-defined location (thanks to the app), the driver gets out and greets me by name (thanks to the app) and I in turn greet him/her back by their name (yes, app). And I was interested in the drivers, always asking questions about their time using the service, how many vehicles were in their fleet, their experience with the app and Uber as a business, and all things checked out okay. They were energetic, excited and were in it to win it.

Every driver I had was polite and very professional. Every car was clean, pristine and had the soft scent of the latest rearview mirror air freshener.

But, and there’s always a but, things have changed.

The promise that Uber made at the beginning – only a few years ago, that no matter whether I was headed to work, a meeting or dinner, I was a special traveler and being treated accordingly, has begun to dramatically decline. Recently I’ve had drivers pull up to my location like they’re in the market for a hooker (I was not hooking on those particular occasions), drivers are civil but not overly polite and warm, vehicles have not been in the best condition, I’ve experienced poor driving and, most bizarrely, drivers not being able to follow simple directions on the app (which is crazy, because I was watching the exact same thing, and how difficult is it to find an international airport anyway, Mr Driverguy!?).

I believe the barrier to entry for drivers to access Uber has lowered substantially, and that’s where the problem lies.

You see, to me, all drivers who use the Uber app are considered Uber drivers. They may not be legally bound as Uber employees, and Uber the company can always say that these are independent drivers who just happen to use the app, but to the customer they’re all drivers under one big brand.

So this morning at around 04:30 an Uber driver picked me up to take me to Cape Town International airport, and the trip went as follows:

Don: Morning <name>. How are you doing?

Driver: I’m well thank you. Are you <looks at phone> Mr Don?

Don: Yup. (Note: I was the only soul on the side of the road at 04:30 in the morning at the exact point where he needed to pick Mr Don up, but I appreciate his thoroughness.)

Driver: And we’re going to <rattles off address we’re currently at>?

Don: So how was your evening? Did you work through the night or did you kick off early this morning?

Driver: Today is only my second day driving with Uber, so I started at 4am yesterday morning to do as much as possible and I’ve been driving since then.

Just let that sink in… He’s been working for 24,5 hours straight – on his first day on the job.

Don: Wow, you should really get some sleep.

Driver: Yes, <laughs>, but I’m quite excited for this new job.

I assume my attire reminded him of Jessica Tandy in Driving Miss Daisy, because he drove appropriately. He missed turns, had to double-back, drove 70km/h on the freeway, I had to explain that he shouldn’t be on the right-hand side of the freeway – with the turn to the airport coming up in 500m, and he also had no idea where that drop off was where he should head to, um, drop me off.

I’m not the grinch. Really. Far from it. I encourage people to learn and grow and try new things, it’s a must! However, in the interest of safety (he almost veered into a car alongside us as he darted for the “Drop and Go” lane), and the fact that I’m paying premium (Uber ain’t cheap, folks) for a service, I’d expect to at least be able to get to an airport in a timely fashion without having to monitor the person who’s providing and being paid for the service. And this now becomes Uber’s problem, because he is representing their brand, whether they like it or not.

The guy, unfortunately, just has no clue what it’s like to be a driver. He’s clearly had no experience or training, but is still 100% linked to the “largest taxi company in the world” – even though it owns no vehicles. Oops… 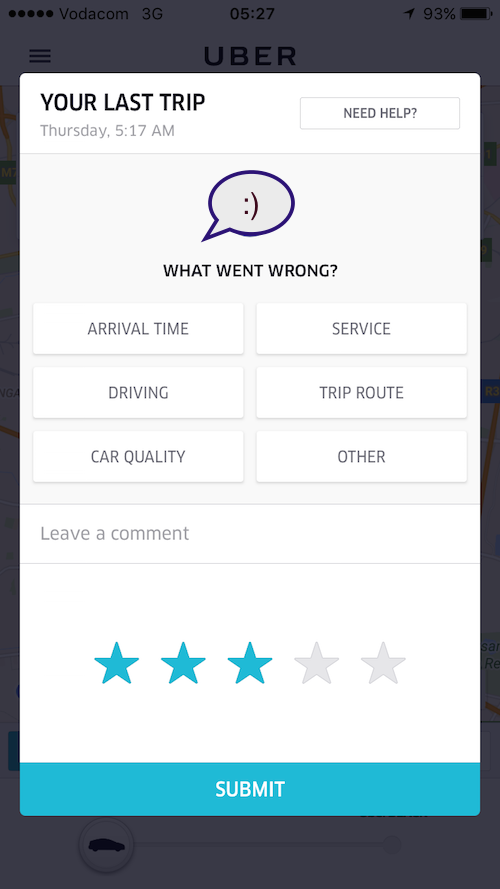 Giving a 4- or 5-star rating on Uber requires no follow-up. A 3-star rating though has this pop-up to fill out. I’m not sure if it’s because Uber considers 3-stars a poor rating, or the fact that perhaps the vast majority of ratings are 4- or 5-stars (I know mine were at the beginning) and 3 seems to be a problem, but it’s there. To be honest, my soft side gave this a 3. On paper it was a 2 experience, but I felt bad for the guy. I’m still human.

However, giving this guy a 4-star rating because “it was his first day and he’s trying his best” would have been an absolute disservice to future passengers. Uber needs to know who’s representing their brands. If you were Uber, wouldn’t you? I’m hoping my feedback (I left a detailed, constructive comment) is taken seriously and they change things up. Not by punishing poorly-rated drivers, but by making access to the app more rigorous for drivers.

So my personal challenge is to be more vigilant when it comes to rating services, because not only do the people in charge need to know, but the people who will use this service going forward deserve to know.