Why your #selfquote strategy should die a fast, horrible death

March 31st, 2017 Posted by Don Packett Uncategorized 0 thoughts on “Why your #selfquote strategy should die a fast, horrible death”
I remember it like it was yesterday.
Confucius, Aristotle, Albert Einstein, Nelson Mandela, Maya Angelou and Steve Jobs sitting in their light-wood-design co-working space, plugging away on their Macbook Airs, trying to decide which of their soon-to-be-famous quotes worked best with which studio photos they’d just taken of each other.

END_OF_DOCUMENT_TOKEN_TO_BE_REPLACED

Dolly Parton had it easy: Why 9 to 5 is not enough anymore

March 26th, 2017 Posted by Don Packett Uncategorized 0 thoughts on “Dolly Parton had it easy: Why 9 to 5 is not enough anymore”

Dolly Parton’s 9 to 5 is a beautiful representation of the dull, mindless slog most people feel like they go through every single day, in order to get their paycheque at the end of the month, with no recognition, resulting in making rich men richer. The chorus is extra-specially fun…

END_OF_DOCUMENT_TOKEN_TO_BE_REPLACED

1. to point out or point to; direct attention to

2. to state or express, especially briefly or in a general way; signal

In my experience, most cars on the road have indicators fitted for obligatory purposes only when changing lanes. To indicate is to share an intention with others. Therefore, when changing lanes, indicating to let others know you’ll be turning, before you actually turn, is the correct procedure. Most drivers, though, hit the indicator with their hand while they’re turning the wheel.

Did they share their intention with others beforehand? No.

As a biker riding between lanes, I know this sneaky little cage-driver trick, so my first indication of anyone turning is not the indicator, but their front wheel. If it starts to turn toward your general direction, you know they’re about to make a break for it. I’m pretty good at identifying these, however, sometimes I get it wrong.

This whole non-indicating indicator dilemma got me thinking: Is the real reason people actually don’t give enough time to indicate (set their intention) because when others see it happening, they race ahead to not let them in? I’ve seen it happen. It may have happened to you. Hell, you may have been the douche closing the gap!

Is this how people generally tend to think? Much like they hold back on the indicators until the last minute, what are people holding back on in their business or personal lives? To make it personal, what are you waiting to do/launch/create that you don’t want others to know about until the very last second, just in case they steal your idea or break it down before its begun?

Time and again I hear of people who had amazing ideas but never executed them (I’m guilty of this myself, too) because they didn’t want anyone else to know about it until it was ready to launch, but then someone else launched it before they could.

The one thing that we never learn though (read this about learning from others’ mistakes) is the fact that their idea was, in fact, eventually executed by someone else. Which means your idea is not only in your mind. It’s everywhere. Ideas are developed through experience, and there are loads of other people experiencing similar things to you right now, and will have ideas too. Probably ‘your’ idea.

So what to do?

Simple: Get that idea out there. Don’t hold it in. Make it. Own it. Tell the world. Do your idea. Stat.

Johann Wolfgang von Goethe was onto something!

March 8th, 2017 Posted by Don Packett Uncategorized 0 thoughts on “Johann Wolfgang von Goethe was onto something!”

It amazes me that in today’s opportunity to learn, grow and do better, the world is still full of idiots.

However, so many people have sought, blundered and learnt in the past, and those seekings, blunders and learnings have, in turn, been shared and taught! So I sit here and ask myself this question: Why are there still people in the world who get on planes headed to Abuja to settle the estate of Nigerian princes that they believe they might be related to (or won a lottery they never entered), or forward emails from Bill Gates thinking they’ll get a free laptop, or add friends on Facebook that are 100% fake – who are undoubtedly set up to glean information from them. 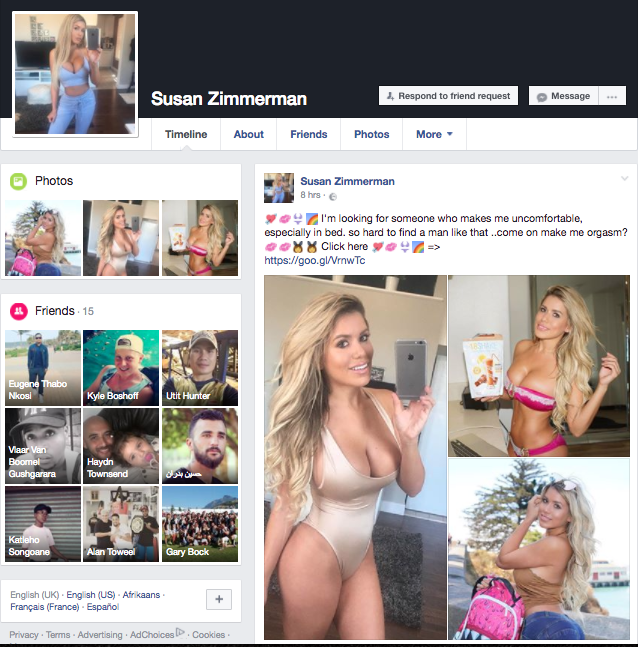 I received a request from “Susan Zimmerman” earlier today, and wasn’t shocked that not only had she made some friends already, but they’re all guys. Why Eugene, Kyle, Utit and all the others added her? I’m guessing for the hope of some more raunchy pics to hit their timeline. Have they not heard of the internet? Raunchy is on-demand!

So why am I writing this? We’re running a strategy facilitation for Missing Link tomorrow, guided by the Legacide principles. In this session we’re going to look at our own business, identify what legacy thinking is holding us back and, in turn, look to the world to see who’s sought and blundered and already learnt from these mistakes, how they fixed them, and then define how we apply them to our own business.

It’s going to be one helluva ride. Thanks Johann Wolfgang von Goethe. Legend.

That’s my story and I’m sticking to it, officer…

March 3rd, 2017 Posted by Don Packett Uncategorized 0 thoughts on “That’s my story and I’m sticking to it, officer…”

I butted into a conversation in the office last week that went something like this:

Guy 1: “Insurance is such a waste. And expensive.”

Guy 2: “I know. And the value of my bike keeps going down, but I keep paying more insurance. So kak.”

Now, maybe it’s because we deal with insurance firms a lot, or I have a strong affinity to people/organisations changing things up, but I honestly thought that something as ground-breaking as ‘you pay less insurance every month as your vehicle depreciates’ would be known and understood by every person who complains about insurance premiums. Seems, to me, to be a no-brainer. The story is sound.

Which made me think about other organisations and how they’re telling their stories. “Brand refreshes” – for the most part – are only real big winners for consultants and the advertising/marketing industry. Customers don’t want a big fat new promise every second year, what they want is for you to be awesome. Let me pay you money to do a great job, and we’ll be friends. Simple. One of the big lessons from Tom Peters’ “In Search of Excellence” (originally published in 1982, FYI) is simply “Stick to your knitting”. Do what you do well, and keep doing it. Companies who stick to this principle in not only the work they do, but the message they deliver, are the ones who succeed.

Am I saying ‘never change’? Of course not. Better yourself, better your product, but always stick to what you believe in. Things change and need to be addressed as and when necessary (read Legacide to help you out with that) but that doesn’t mean you should lose the fundamental essence of what you’re in business to do. The way that message sticks with your customers and staff is through a solid story.

Because a great story lasts a lifetime. Ever met Aesop? Nope, me neither. Know any of his stories? Of course we do. Why? Because they’re easy to remember, and easy to share with others.