Are you a Thought Leader or Thought Follower?

April 13th, 2017 Posted by Don Packett Uncategorized 0 thoughts on “Are you a Thought Leader or Thought Follower?”

A thought leader is someone who is sharing (in text, images, audio and video) their own unique perspective. That would be the “thought” component of the equation. A thought leader is someone whose unique perspective is seen and accredited by both peers or other industry experts as truly being visionary (saying and doing the things that others have yet to do). Leadership isn’t just about being first. Leadership is about how the thinking is ingested and used by the audience.

Back in the day, in my world, the term ‘Thought Leader’ (much like ‘entrepreneur’, but let’s leave that for another post) was reserved for the people who made a difference by sharing their thoughts, which created the path, paved the way, laid the foundation, and did all those good things for people who needed guidance, and those people in turn took that information and did great things with it.

Today, throw a stone out of your office window (or into the next cubicle) and you’ll be hard-pressed to not have it hit someone who has deemed themselves a Thought Leader in one or another field of expertise. Hell, even writing these posts may have me thinking I’m one too. What’s the point of all of this if no one is going to read it, internalise it, stand up and do something about it, right? 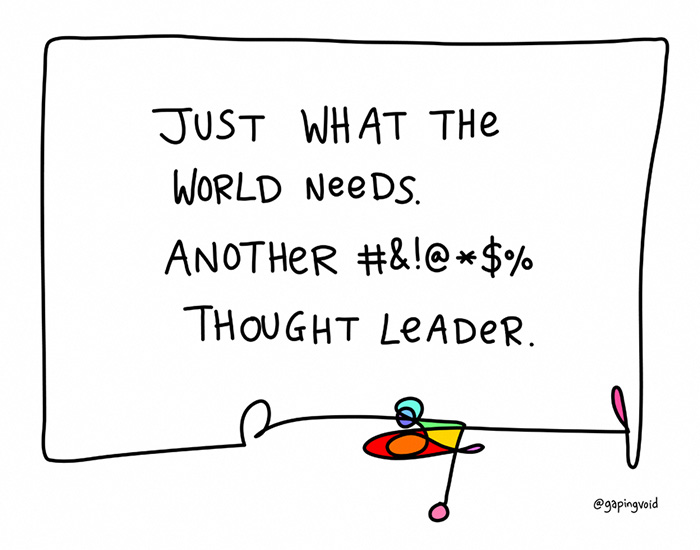 Mark Weinberg recently posted an update on LinkedIn which read:

OK, I’ll be the jerk to say it: This relatively new practice of making a comment on LinkedIn and then tagging 50 thought leaders so they read and comment is a very cheap way of getting attention and over-the-top annoying. Please stop everyone. Please. Nobody wants their stream filled up with meaningless mentions. If your content is good, it will get found naturally and gain momentum. Stop trying to shortcut the system. Trust me, it’s not helping.

50 Thought Leaders!? In a single comment!? How can you be sure that those 50 people are the right ones to get this information, and that they’d truly care? (Side note: Check out Rich‘s video on sharing thoughtfully).

Now, Mark is a speaker, consultant and author. All of those arenas focus on sharing information – his thoughts – so that people buy into him, his message and then, as above, they go out and do something with it.

Of the 248 comments (at time of writing) one in particular by Iain Lauer caught my attention, especially his opening:

Reflecting upon the term “thought leaders”, I find it amusing – it tends to suggest that the rest of us are mere “thought followers”. Interesting notion.

Now, is it as cut and dried as that? Of course not. But Iain really had me stand back and think about this in a completely different light (thanks big guy). Can you be one or the other? I don’t think so. I think you’re both, always. But I do believe you can be more of one than the other, and the further you go on the scale could potentially be to your detriment. Let me explain:

An extreme 100% Thought Leader, with no Thought Follower mentality, lacks the perspective of others and will eventually get caught up in their own bullshit, picketing outside of parliaments demanding ‘the rest of you’ understand that the world is, indeed, very much flat.

On the flip-side, a 100% Thought Follower, with no Thought Leader qualities, will just do. And only do. No thinking, only doing. A meat-covered, programmed robot. But with the sheer magnificence of biology, we have these incredible things called brains locked up in our skulls which can do amazing shit. Like think, and wonder, and gather information, and make sense of that information, and then do something with that information. If you’re only consuming and doing, you’re missing out on huge potential.

Further research into this landed me at author Todd Henry’s post from 2013 talking about this very issue. His belief is that the world needs more Thought Followers. Here’s how he describes them:

These are people who immerse themselves in the brilliant, challenging thoughts of others, commune with great minds, and then follow their own thoughts wherever they might lead. They aren’t afraid to humbly submit to the great insights of others and consider their implications to their own work. They are fiercely curious. They love process. They set aside time to savor great writing. They understand that brilliant ideas are excavated and assembled, not self-generated.

My favourite bit, and something that reflects what’s been quite close to my heart recently is this line:

The funny thing is that those who become great “thought followers” are the best candidates to later become “thought leaders”, but they probably won’t self-adopt the tag.

So where does this leave you?

If you believe you’re a Thought Leader – whether self-proclaimed or not – ask yourself how far on the scale you really are. A few quippy blog posts or tweets does not a Thought Leader make. Then, act accordingly. Share content from smart people. Learn things. Then share that with others. Follow more. And if you’re truly honest with yourself, you might want to kill that title from your profile.

And if you believe you’re a ‘mere’ Thought Follower, know that you have the potential to share your own thoughts with the world, that what you’re thinking could change someone’s view, or life, and help them grow. Everyone has the power to educate.

And remember, we all have a little of both characters within us. Use them wisely.